It is quite difficult at first to precisely define ‘Complexity Science’. It is a new perspective of methodology and modeling approaches that are based more on reality than assumptions. Quite simply put, Complexity Science is a new way to grasp and manage reality. It does not study systems in isolation like gambling dice or planetary motion only. It studies the complex, holistic, inter-connected reality in which we actually live such as financial stock markets, social policies, economic policies, natural catastrophes and so on. This post is meant as a sweet and short intro to Complexity Science. Complexity Science can also add value and be a complement to Big Data and Data Science models, approaches and technologies.

Key insights of complexity science which has delivered better results than traditional approaches are[1]:

There are at least forty measures of a complex system’s complexity. These measures relate to how hard it is to describe the system, how hard the system is to create, or the degree of its structure.  Examples of measures are Transaction information, Network complexity, Degree of hierarchy, Algorithmic information content, Logical depth and Statistical complexity.

Complexity science shows us that we handle complex systems like the economy, health care administration, financial stock markets etc on a daily basis. New risks from these systems do not arise out of the blue but that the a portion of the clusters and syndrome characterizing the complex system morphs to another syndrome with most of the components remaining fundamentally similar even though their manifestations might have changed.

To analyze these clusters, changes in syndromes and consequently the core that remains fundamentally the same, complexity science applies network theory and analysis to explore the underlying structure.

Network theory studies agents and the relationships between them. A network study from several years ago demonstrated that the seemingly tiny influence that trading has on the market becomes increasingly significant as the number and complexity of financial instruments increases. The generic result is violent market fluctuations and instability. Financial institutions still find ways to profit by creating and selling new derivatives, even if these deliver no benefits to the market and actually drive the system toward trouble.

Graphs are first established in “layouts” which show correlations between agents and their inter-relationships using graphs. A number of archetypical layouts for graphs are shown as follows: 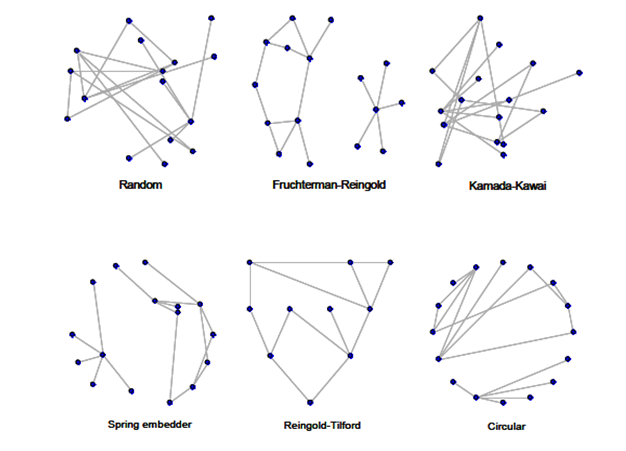 In addition, there are four main models in network theory: ‘random’, ‘lattice’, ‘Watts-Strogatz’ and ‘Barabasi- Albert’.  Each of these models with 1,000 vertices each has been shown by Alan Mills using the Fruchtermann- Reingold layout: 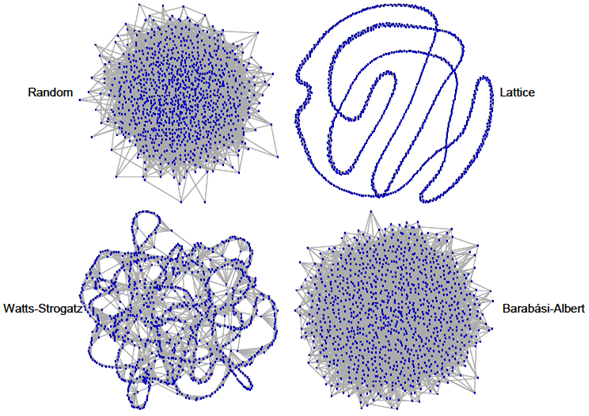 In his speech, Andrew Haldane applies network theory and observes that over the past 20 years the world financial network has become:

This shows that networks emerge rather than being created and can be used to analyze emerging risks and liabilities effectively. For instance, targeted attacks against venture capitalists to drone technology will mean that this technology might never actually take-off whereas random attacks on viability of drones is not likely to affect its development.  Collapse in one area of the economy can translate into economy wide contagion and confidence shaking emerging risks like antibiotic resistance, ebola and other epidemics will contagion on health insurance through loss of confidence far greater than anticipated through traditional actuarial and economic theory.

There is a key deficit of network theory. It is that it relies on historical data to generate networks; we can see networks that have evolved and analyze them for 2008 financial crises and current products like telematics but what about networks that are yet to emerge?

Agent based modeling effectively addresses this shortcoming.  It is recognized that network theory uncovers a lot of important underlying structures that blind traditional actuarial theory. Moreover, key concepts like robustness, fragility, emergence, the topological geodesic structure into particular network models etc are likely to remain the same even though their manifestations will be different for emerging risks.

Hence, to organize behavior rules to set as base for agent based simulations, Common tools that complexity scientists use are extrapolating network trends from similar risks like extrapolating telematics network for drone insurance, game theory, genetic algorithms, heuristics and cognitive tendencies that we humans apply uncovered by behavioral finance, and neural networks.

Agent based modeling combined individual decision and network rules to model policyholder behavior, allowing us to simulate behavior at an individual level and then analyze the overall, aggregate outcomes. These models simulate the simultaneous operations and interactions of multiple individuals to recreate a system and predict complex phenomena. This process results in emergent behavior at the macro level based on micro-level system interactions.

Real life indices can be modified and then applied to the serious game simulations. For instance, the Chicago Board Options Exchange Volatility Index, (CBOE VIX) is a well-established indicator of market risk aversion tendency, or risk appetite. The value on the VIX is basically the square-root of the risk neutral expectation of S&P variance over the next 30 calendar days. This can indicate the ‘fears’ and ‘ambitions’ of the market cycle appropriately.

The next post will follow a case study of agent based modeling to real life problem of underwriting cycles and highlight how Complexity Science adds value beyond traditional analyses.

[1] Mills, Allan: Society of Actuaries (2010): Complexity Science: an introduction and invitation for actuaries.

[3] N. Allan et al (2011); IFoA: A review of the use of complex systems applied to risk appetite and emerging risks in ERM practice

[4] Mills, Allan: Society of Actuaries (2010): Complexity Science: an introduction and invitation for actuaries.

this is the case almost everytime. physics is at the forefront of the cutting edge of latest researches. Only after many years does it start to being applied to finance.

The SOC original paper from Physical Review Letters is found here.  There are free copies of it found on the net.

"Self-organized criticality: An explanation of the 1/f noise"

Complex system theory originated in physics, ie, the physics of large systems with many interacting components. It has always been a branch of physics over the last  half a century and still is today.  Research in complex systems have spilled to other disciplines as well.

Physicists Per Bak, et al, published a paper in 1987 in Physical Review Letters on SOC (self organized criticality) that is widely cited in the literature even today, in its applications from domains of economics, sociology, neuro-science, species-evolution, and many more...

i agree yes its certainly not the only one.

Meaningful post. However,complexity theory does not alone covered big field of research about reality (nature) and models of it.