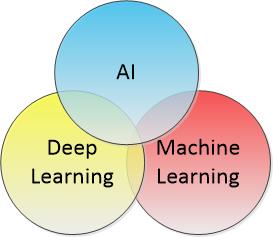 For as precise a profession as we data scientists purport to be we are sometimes way too casual with our language.  Read several articles about AI, Deep Learning, and Machine learning and you will come away confused whether these are all the same or all different.  Imagine how confused non-data scientists must be.

The truth is that each of these terms has some overlap in a Venn diagram but none of these is a perfect subset of the other and none completely explains the others.  Let us explain.

For all the conversation and progress in the field of AI we are still nowhere near either the Terminator or even Rosie the Robot.  The core of fictional (or perhaps aspirational) AI is Artificial General Intelligence (AGI) which does not currently exist.  Artificial General Intelligence is the Holy Grail of AI.  If and when it arrives it will be the true killer app (we hope not literally) that allows machines to function as humans in our wildly chaotic environment.

Fully functional AGI would be able to pass a number of these increasingly difficult proposed tests:

The Turing Test (of Sci-Fi fame):  Convince a human through conversation that it is not a robot. 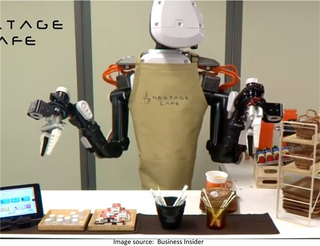 The Coffee Test (Goertzel):  An AGI enabled robot enters a strange house and successfully brew a cup of coffee.

The Robot College Student Test (Goertzel):  An AGI enabled robot enrolls in a college, taking and passing the same exams a human would, and obtain a degree.  Now that we can get degrees entirely on line, the robot may be optional.

The Employment Test (Nilsson):  A machine is given the task of working an economically important job, and must perform as well or better than the level that humans perform at in the same job.

As for AGI, you can see we’re not even close.

The part of AI that is rapidly being adopted into all sorts of consumer and business applications is based on the big three: image processing, text processing, and speech processing (a more complete list would break out image recognition and auto labeling, facial recognition, text to speech, speech to text, auto translation, sentiment analysis, and emotion analytics in image, video, text, and speech).

The breakthrough advances of the last 12 months have resulted in many of these functionalities reaching 99% accuracy up from 95% just a few years ago.  95% or less didn’t cut it for users.  99% makes these apps acceptable.

Image, text, and speech processing (plus robotics) are the eyes, ears, hands, and mouth of AI.  Now like the scare crow in the Wizard of Oz, if I only had a brain (AGI).

Essentially all of the advancements in image, speech, and text AI made in the last five years have been the result of a class of algorithms known collectively as Deep Learning.  These are major advances in the general group of Artificial Neural Net algorithms which have advanced to be able to detect patterns without the prior definition of features or characteristics.  They are hybrid supervised learners in that you must still show the NN thousands of pictures of cats, but without the requirement for predefining the characteristics of fur, four legs, tail, etc.

The breakthrough technology here has two parts.  First, advances in the types and complexity of Neural Net algorithms.  Second hardware, the ability to run these over distributed parallel systems using superfast GPU and FPGA chips on increasingly large networks of processors.

It is common today to equate AI and Deep Learning but this would be inaccurate on two counts.

1. AI is broader than just Deep Learning and text, image, and speech processing.  In fact AI has been around in many forms for much longer than Deep Learning, albeit in not quite such consumer-friendly forms.

Ten and even 20 years ago AI existed in the form of what was then most commonly called ‘expert systems’.  As the name implied, these systems distilled large quantities of domain-specific knowledge such as disease diagnosis or how to select a particularly complex multi-featured device like airbags, and allowed non-experts to reach an ‘expert level’ conclusion.

Originally these decision tree-like apps were built manually based on the input of large numbers of human experts.  More recently they can be evolved more or less automatically using multi-objective decision tree algorithms which are part of legacy data science, not Deep Learning.

2. Deep Learning is broader than AI.  Deep Learning as an evolved form of neural nets can be used to solve regular data science problems in the same way that neural net algorithms have always been used.  A good example is Amazon’s current major investment in Deep Learning to create better recommenders that enhance shopping.  Any segmentation or regression problem from buyer behavior to value prediction is open to the application of Deep Learning.

The least precise phrase in this triad is ‘machine learning’.  There are two distinct schools of thought and usage about this term and both are correct but their conflicting usage is confusing at least.

In the new usage, machine learning is defined to mean only algorithms used in unsupervised pattern identification.  This is intended to be essentially the same thing as Deep Learning leaving aside the inconvenient fact that Deep Learning still needs to be shown examples of correct output, making it not truly ‘unsupervised’.

In the more traditional usage still widely used including by me, machine learning means the application of any computer-enabled algorithm that can be applied against a data set to find a pattern in the data.  This encompasses basically all types of data science algorithms, supervised, unsupervised, segmentation, classification, or regression.

It’s clear that the traditional usage would be much broader than Deep Learning but would not encompass manually assembled expert systems in AI.

Next time you’re reading about AI, Deep Learning, and Machine Learning make your understanding more precise and more valuable by applying these explanations.