Who is using regression models with interactions?

For those not familiar with the concept, below is an introduction to interaction regression, from Stattrek.

And here is the same regression equation with an interaction:

Analysts usually steer clear of higher-order interactions, like X1*X2*X3, since they can be hard to interpret. 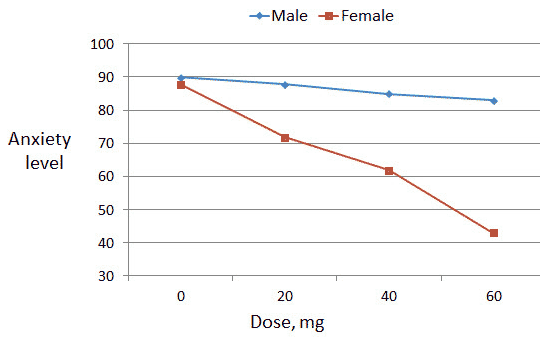 For males, drug dosage has a minimal effect on anxiety; but for females, the effect is dramatic. The effect of drug dose cannot be understood without accounting for the gender of the person receiving the medication.

Typically, when a regression equation includes an interaction term, the first question you ask is: Does the interaction term contribute in a meaningful way to the explanatory power of the equation? You can answer that question by:

If it's a question, then the answer from me is "Me. I do it often, as do many of my colleagues, and I see it often in published articles in my field."

If it's a statement, then perhaps you should modify the title, e.g. "Why it's important to model interactions in regression" might be better. Or just delete "still".

Forgive me if I've got the 'wrong-end-of-the-stick' here but I am always cautious about using categorical variables (especially those with few 'categories') in interactive effects.

In the illustration used here, it is clear that the 'Dose, mg' effect is very different as determined by the gender of the patient.  Your article claims this is an 'interaction effect' but in this case, with only two possible 'genders' (male or female - biologically you cannot be 'both' or even 'proportionally male or female') then it would be much simpler to separate the two regressions.  That is, if the patient is male, y-hat = b0 + b1x1 +b2x2... while if the patient is female, y-hat = B0 + B1X1 + B2X2...

This would be a far more logical approach for this specific illustration, would it not?

I have used this extensively in my previous roles and would continue to do so as the interaction effect is very real in the field of Chemistry (my original discipline) and attempting to consider only the main-effects (with no consideration of interaction-effects) would lead to a false conclusion.  Linear relationships (correlations) are what most chemical analyses are predicated upon so consideration of interaction effects is vital in this field.

I hope I have understood and interpreted your question correctly.  Thanks for the prompt to enable me to join the fascinating conversation.