Ice melting: could the cause be natural, and other than global warming?

I don't deny that global warming exists, I can almost feel it, and it should contribute to accelerated ice melting. But could there be an even bigger factor that explains how fast the ice is melting? A factor big enough that even if climate changes and switches to global cooling, the ice sheets will continue to melt at an accelerated pace. 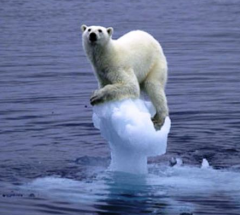 This is my naive explanation. Let's say that you old a 50-gram ice cube in your hands. After 10 minutes, half the mass has turned to water. After an additional 5 minutes, there is no more ice. It took twice as much time to melt the first half of the cube, than it took to melt the second half under constant temperatures. This is a law of physics, like gravity. Could this explain what is happening to Greenland and other ice sheets? This law of physics is well known, so it should be easy to compute how much of accelerated melting is due to this law, versus how much is due to other causes.

The picture gave me an idea to slow down the process: cover the ice with a layer of whatever material that is cheap. Maybe ashes will do. The choice of the color is important.

When visiting glaciers, I always notice big rocks that seem to be floating above the ground, but actually they are supported by a column of ice protruding from the glacier: the rock slows down the melting, creating these ice columns

Your question is best directed to the researchers and modelers [?]. I would categorize this process as falling into the self-reinforcing feedback loops and would be shocked if this has not been included in the equations.

Above is a set of graphics presenting major astrogeophysical, atmospheric chemistry, volcanic activity and anthropogenic carbon factors regarding global warming.  For me, the issue was settled years ago, but now the scientific community has clear, convincing evidence and compelling presentations.

It's not insolation changes, cosmic ray flux, under-sea volcanic activity, insect or ruminant gas, or any of the other absurd possibilities offered by the 'deniers'.  It's the human race and our carbon-based energy generation and consumption.

There's a glacier forming inside the caldera of Mt St Helens. How can this be possible?

Recently the IPCC declared that the world is in a "pause" of warming cycle - and the pause began in 1994. What they are confessing is that since 1994 there has been no measureable evidence of warming. Otherwise, why the need to declare a "pause"?  The real question is: Is this a "pause" - or does this represent another reality?

Which is why your observation of accelerated melting makes perfect sense. As a skeptic, I don't point to the sky like chicken little or look at every little anomaly and attribute it to the same cause. Coincidence in human forensics is non-existent. Coincidence in scientific observations are ubiquitous.

This is always such a dangerous subject to weigh in on given the ideological polarization on the issue. But it's also a great topic for data science and science because so much of both are tied up in this.

Let's work our way through some of these fact claims and assertions.

How can Mt St Helen's have a glacier?

From USGS website: At an elevation of about 2,000 m (6,561 ft), the glacier would not exist on a typical Cascade mountain nearby. The steep crater walls shade the glacier from sunlight during most of the year and rock debris mantles its top, which provides a perfect environment for the newest and one of the few expanding glaciers in the Cascade Range.

Right of the bat this method of argument is an anecdotal fallacy. A isolated example is picked and cited as a reason to unravel the prevailing conclusion of 40,000 published climate science papers by over 60,000 scientists over the past 40 years. I think by now we've all learned how easy it is to fall prey to cherry picking one fact, and thinking it negates all the science that has gone before, especially if we fail to ask ourselves "Is there another possible explanation for this fact?"

There's a pause - does it represent another reality?

The attempted quote of the IPCC is also quite flawed. The source in this case is Phil Jones, who is an IPCC scientist, and what he actually says is that the rate of warming is positive but not at the 95% significance level. He then says that there is undeniable warming in every part of the climate system in the past 15 years and that nearly all of that is due to human activity. Choosing to take an experts quote out of context and then omit the most relevant parts reveals more about the motive of the person taking that course than about the issue they are claiming to refute.

In the end it's healthy to bring a skeptics mind to this subject, and then deal with the following:

Thousands of scientists from dozens of competing universities, some even funded by deniers have gone out and measured these phenomena. They've considered natural cycles, solar radiance, cosmic rays, volcanic outgassing as hypothesis to explain these. Those hypothesis make testable predictions which don’t match the phenomena. The best remaining explanation is that CO2, which absorbs and re-emits infrared radiation (heat) and has a 200+ year half life in the atmosphere is trapping heat in the oceans, land and lower troposphere. The planet will take hundreds of years to rebalance this heat (which it will do). The signature of much of that excess CO2 in the atmosphere has the isotope ratio that correspond with fossil fuel burning.

It might very well be that something else is causing the warming and it's a coincidence that CO2 levels have risen at the same time. Science doesn't deal with many certainties and climate is an incredibly complex system to model. But the consequence is that we're locked in to 20+ feet of sea level rise if paleoclimate data is anything to go on. That's 375 million people's homes and cities under water. In a 50-300 year time frame (tidal & storm surge heights likely to start making low lying areas unlivable sooner.) So, given the gigantic negative ramifications, we've made lesser changes on equally certain/uncertain science and reduced smoking rates, reduced CFCs, removed lead from gas & paint and been very successful. When have we banned or shifted away from a likely toxic pollutant and not reduced harm, seen the economy survive the transition and not produced worse secondary consequence. (you are free to throw DDT in here, but make the whole case)

In response to Mirko's hypothesis that kicked this thread off. Ice melt physics are well understood and incorporated into the models. There is no forecast for cooling in our future, even slightly lower solar radiance isn't going to drive a major cooling effect as long as the heat trapping layer of the atmosphere keeps increasing. 40 Billion Tons of carbon each year will swamp any of the predicted solar radiance variations.

And finally Vincent's call for some exploratory geo engineering to try to mitigate the effects of warming is likely what we will try to do. Sadly I bet we take those actions with far less science to back up those efforts than the science that backs up CO2 as the cause of the problem in the first place.